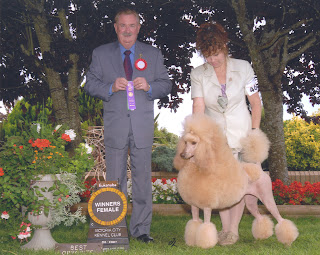 
Rosa took Winners Female her second day into the Show
for her required two points towards her Canadian Championship.
Thank you and Congratulations to Jenn. 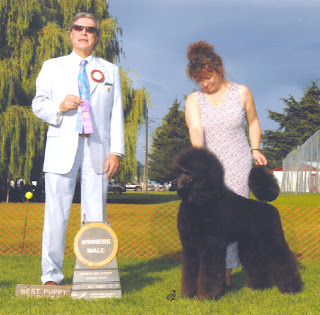 June 8, 9, & 10th, 2007
Comox Valley
"Greta" being Cadbury`s The Garbo Mystique and I for our first time out together, took
Winners Female & Best Opposite Sex under Judge Leslie Rogers.

The next day she took Winners Female, Best of Breed and a Group 4th 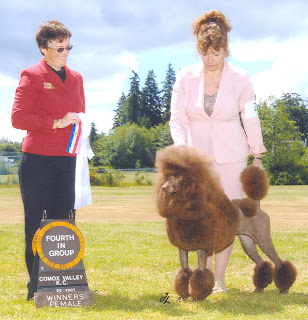 Thank you Judge Kathy Stewart
to follow the next very windy day with Winners Female,

Best of Breed and another Group 4th!!! 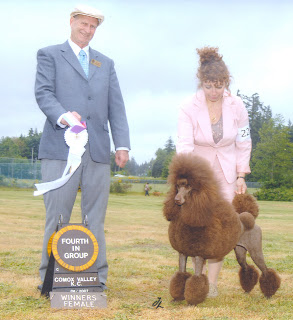 This put Greta onto 7 points our first weekend out towards the required 10 points needed for her Canadian Championship.
Congratulations to her proud family!

Greta took Winners Female one day of three with a

Best Opposite Sex giving her 2 points for a total of 9.

Greta`s photo did not turn out under a different Photographer than pictured above.

July 6, 2007
Vernon & District Kennel Club
Greta took Winners Female with Best of Winners giving her 3 points.
She is now Can.Ch.Cadbury`s The Garbo Mystique finishing in 7days with two Group 4ths..
Not bad for a BROWNIE at all!!!
To complete her grand day Greta and I ran in Lure Coursing straight
out of the Conformation Ring to Lure Coursing in our Show clothes!!

Greta is very special to me.

She would look into my eyes with her`s that would cause me to melt and smile!

for Greta`s page visit this

Sunday Nickel and I took Winners Female,
Best of Winners and Best of Breed over a Special.

We continued onto the Non-Sporting Group where
Nickel -UKC.Int'l.JA.Ch.Alchmys Magic Tin Nick-L Blues CGC,RN,HCT
took a GROUP 1st
for 5 points with an automatic win of
Best Puppy in Group!! 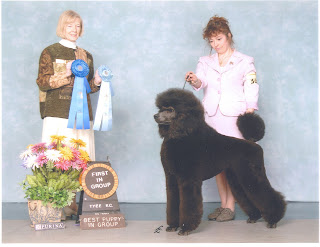 April 3rd, 2005
Kiwanis CLub Dog Show
Congratulations to Catherine with"Trinity" - Teannas Triple Threat
whom has shown Trinity herself doing a wonderful job.
I also thank you for allowing me to take her into the
Non-Sporting Group Ring where we took a
Group Third for her last 2 points to finish Trinity`s Canadian Championship!!! 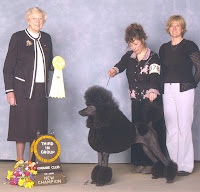 I wish you the best in your start of Poodles!!
NightsEcho Poodles 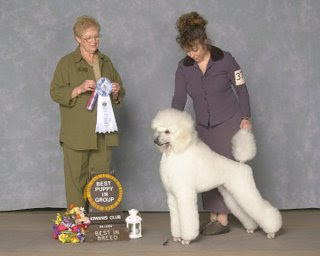 April 1 st, 2005
Kiwanis Club Dog Show
Our second weekend out together, Rorie - Euphoricfx`s Kimelle Aurora
takes Winners Female,
BEST IN BREED and a BEST PUPPY in GROUP!!!
Congratulations to Kimelle Standard Poodles on Rories first 2 points!!!
Rorie is truly a sweetie.
Thank you Kim for sending me your Doll!!

December 17th, 2004
Congratulations to Lorraine on her new Canadian Champion.
She is now silver Can.Ch.Seransil Echoing The Moon.
Echo and I went into the ring for our first time together to achieve her Canadian Championship going Winners Female and then Best of Winners for 4 points. 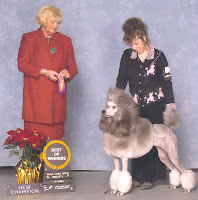 Congratulations again and thank you for letting me have fun with Echo that day! 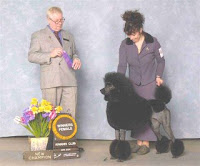 She is a Poodle whose love for the Shows started with a delighted bark as we rolled onto the Show grounds. Her enthusiasm was pleasing. She would await me with eager anticipation outside the Ring while I`d be showing a Dog. As I`d approach her, she`d be on two hind legs with the fronts pawing the air. LOL She also knew the Dogshow was for the whole weekend and would be able to play more with me. No fooling that girl. Just goes to show how SMART those Poodles really are!!!
Katrina going Winners Female & Best Opposite Sex.

One Poodle & Owner who will always be near and dear to me.

Thank you for entrusting your very special girl with me. Good luck towards her Obedience and Hunting!! 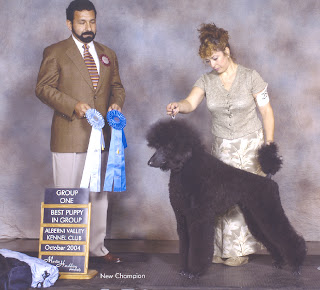 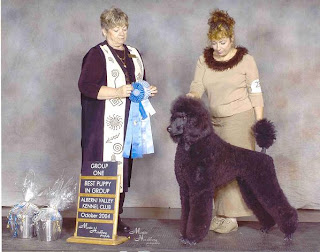 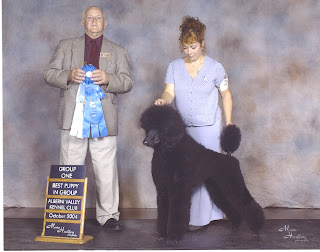 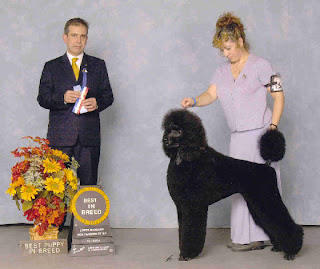 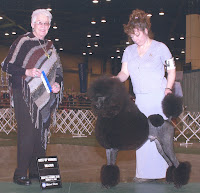 March 19, 2004
Congratulations to Jac Harbour of Tudorose Standard Poodles.
Jac caused a little Riot in my life!! She is Int`l.Ch.Tudorose Cosmic Riot,CGC better known as RIOT!! What can I say but Jac has some wonderful dogs. Riot and I went to Puget Sound Poodle Club where we met Jac, John & Why. Jac and Why took Best Bred By Exhibitor in the HCC and Riot and I took Reserve Winners Bitch!!! I was thrilled as she was in the Hunting Trim as well or the (HCCRiot) over some very nice bitches!! After being pointed to and I told Riot a job well done, she presumed to entertain her audience receiving applause!! LOL
Thank you to Judge Mrs.Helen G. Tomb-Taylor. I took Riot back home to Canada to show where she recieved another Reserve Winners Bitch in her HCC to some very nice bitches once again. Thank you Jac for sending me your Riot to show!!!!!!

March 12, 2004
Congratulations to Kim Savor of Kimelle Standard Poodles.
Bisque and I entered the Showring at Mt. Cheam Show on Friday taking Winners Female for 3 points (no Males entered so no Best of Winners available) and onto Best Puppy in Group!! 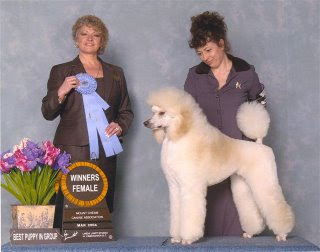 On Sunday Bisque and I went onto Winners Female, Best of Winners and Best Puppy in Breed for another 3 points giving Bisque 6 points. Kim and Bisque finished together at Burns Lake.
Congratulations Kim and Can.Ch.Kimelle Bisque Cockayne!!
She is a cutie pie!!

Am.Can.Ch.Cabernet`s Cut To The Chase 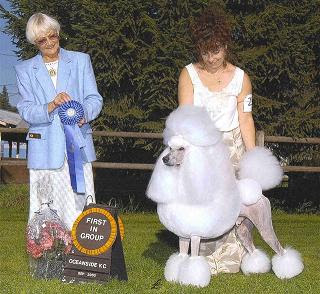 September 26, 2003
Congratulations to the Owner and Breeders of Am.Ch.Cabernet`s Cut To The Chase. For our first time in the Showring together, we received a Group 1st under Judge Leslie Belfit. We are shy of 1 point for Chase`s Canadian Championship in 1 weekend of showing.
Thank you for this wonderful opportunity with such a loving and exquisite boy!!
October 25, 2003
Congratulations to the Owner and Breeders of Am.Can.Ch.Cabernet`s Cut To The Chase on his New Canadian Championship. Chase has a very special place in my heart. Both weekends out with Chase, we have had our photos in the Province three times, front page of the Maple Ridge Times and we were also on TV News!
Chase is the Sire of my two Litters with Shiraz.
See Champions and Previous Litters on my website.
http://www.violetstandardpoodles.com/

Tyee Show - Mill Bay, Vancouver Island, B.C.
May 2003
The Standard Poodle I showed in March of this Year Can.Ch.Averina Bodicea Crystalton that gave me my first experience of two All Breed BIS`s and BISS of one weekend, is the Sire of Jack age 12 months and 1 week, whom I showed at Tyee in Mill Bay of B.C.
For our second day together in the ring he went onto a
Group 1st for 5 points!!
Then he went onto Pee Wees with his 4 year old Master Erik. The smile on Erik`s face outshone a Christmas Tree!! It was very touching to see a little boy so happy with his dog!!
Our second weekend out together, needing 4 pts for his Title,
Jack is now
Can.Ch.Bodicea Can`t Touch This.

March of 2003
Our Very First
BEST IN SHOW 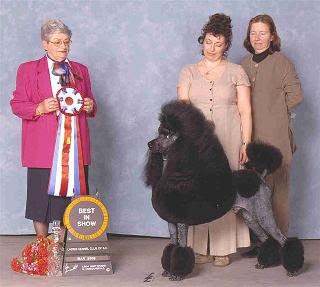 BEST IN SPECIALTY SHOW
both on the same day!!! 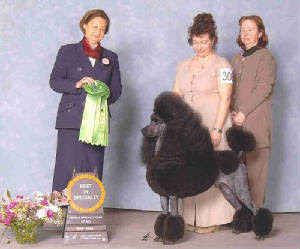 Not to change our luck for the next day with another
BEST IN SHOW!! 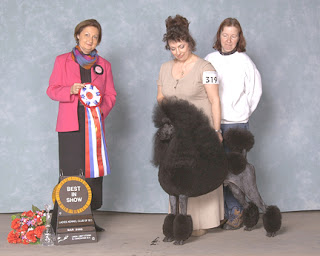 Thank you Janis and Pamela for putting your faith in me with
VALENTINO, especially our first time together.
Can.Ch.Averina Bodicea Crystalton.

With this weekends wins, plus one more Group 4th,
Valentino and I had accomplished him being Canada`s
# 2 Standard Poodle and
#3 Non-Sporting Top Dog!!

What a great thrill!! 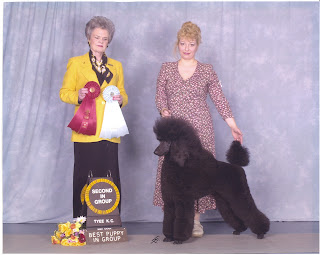 Tyee Kennel Club - Mill Bay, Vancouver Island, B.C.
May 2000
My second Standard Poodle to play with in the Showring was
Carrington Highprofile Dazzler.
Sydnee lived with me for a year which during that time we went to handling classes so I could continue learning.
Our first win was under Michelle Billings for a Group 2nd with Best puppy in Group for 5 points, taking the Breed over an Am.Can.Champion. Was I surprised and happy!!
The next month we were off to PCA (Poodle Club of America) National Speciality for my first time and not to be my last. Terri Meyers showed Sydnee taking 1st in her class.
(hence the big hair for Terri to groom and plus I was inexperienced at grooming)

Can.Ch.Carrington Turns Up The Heat 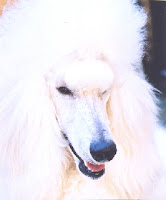 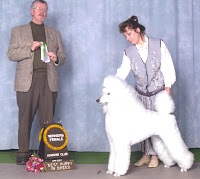 This was at the beginning (for grooming and showing) after I had finished
showing Zarrah for her Canadian Championship.

I have always enjoyed showing my own Standard Poodles since the start
with Zarrah jumping in as a green novice in the winter of 1998.

I was approached by a Breeder whom thought I could get a
Best In Show
on her Standard Poodle which I did, in fact
2 BIS and a BISS with a Group 4th
on the first day of three days.........well I recieved a few more to show.

I had also promised to help someone and upon doing so, I had impressed her Breeder so much she sent me a few of her Standard Poodles to show.............